It was a warm February day when we first met the kitten in the engine. Unbeknownst to my husband, a little feral kitten had crawled up into his car engine while he was at work. When Matt drove the 27 minute commute home on the highway, at speeds up to 65 MPH, he had no idea that a little kitty was clinging on inside for dear life! Matt pulled into our driveway, turned off the engine, and heard the unmistakable caterwauling coming from inside the car. He popped the hood of our minivan and was promptly hissed at by a scared, yet very feisty baby cat.

Matt ran to our front door and simply said to me, “Come outside NOW! You have to see this!” At the time, I was on the the phone with my big sister reminiscing about our dad…and crying. 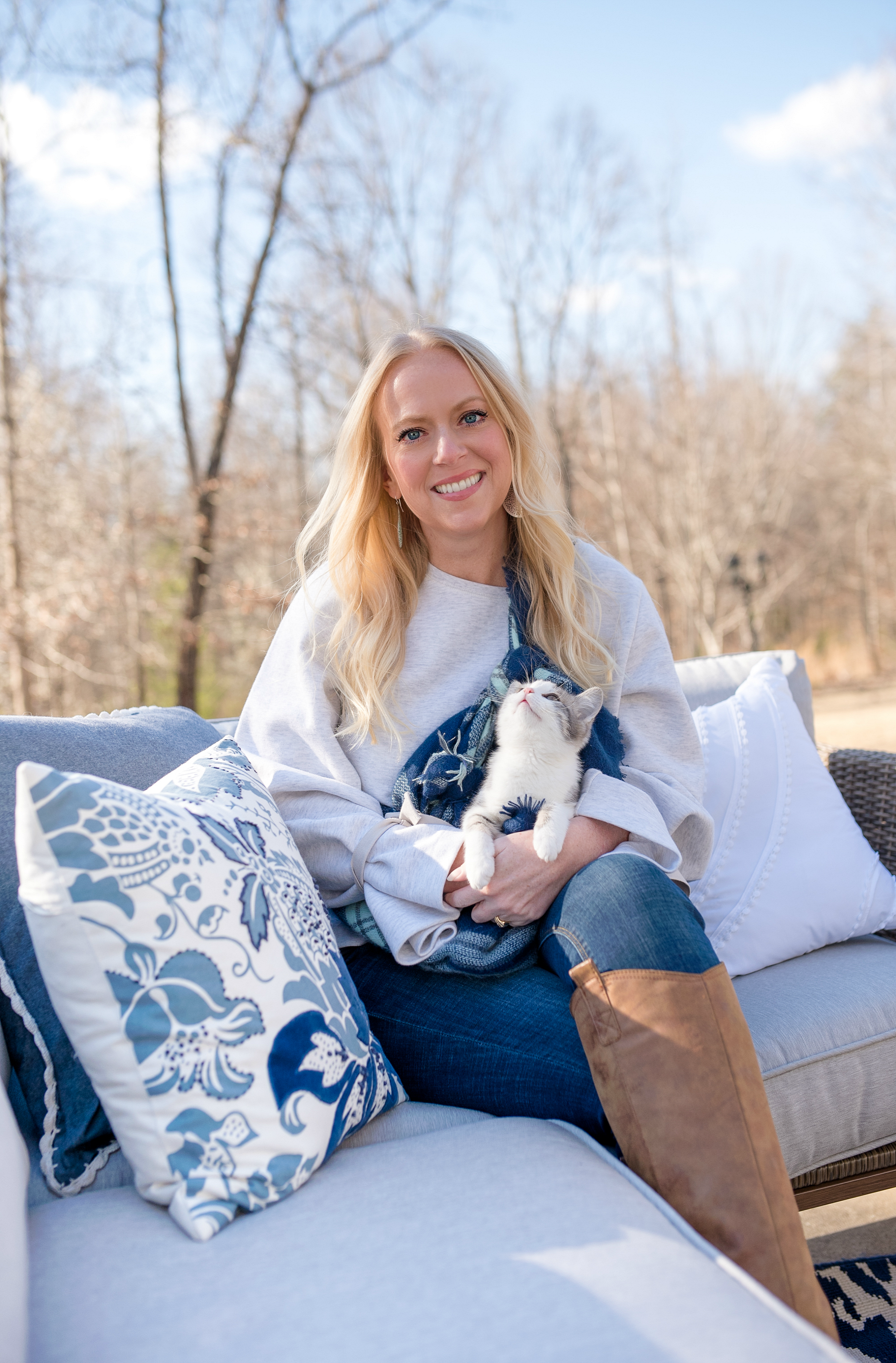 You see, the day the kitten arrived in our engine marked the 8th anniversary of my daddy’s death. Every February I struggle with sadness and deal with those feelings by eating copious amounts of dark chocolate, looking at Pomeranian puppies online, and scoping out tropical vacations. Come to think of it, both of our Pomeranians were acquired during the month of February. Who knew that instead of a sweet puppy this February, I would acquire an adorable feral kitty. Sprockets felt like a little miracle of life dropped in our lap (literally) to remind us of God’s goodness and the simple joys in life. Instead of feeling sad that day, I spent the day petting and playing with a kitten and just enjoying his sweet kitteness! What a gift to just live in the moment instead of dwelling on what I wish had happened differently in the past. 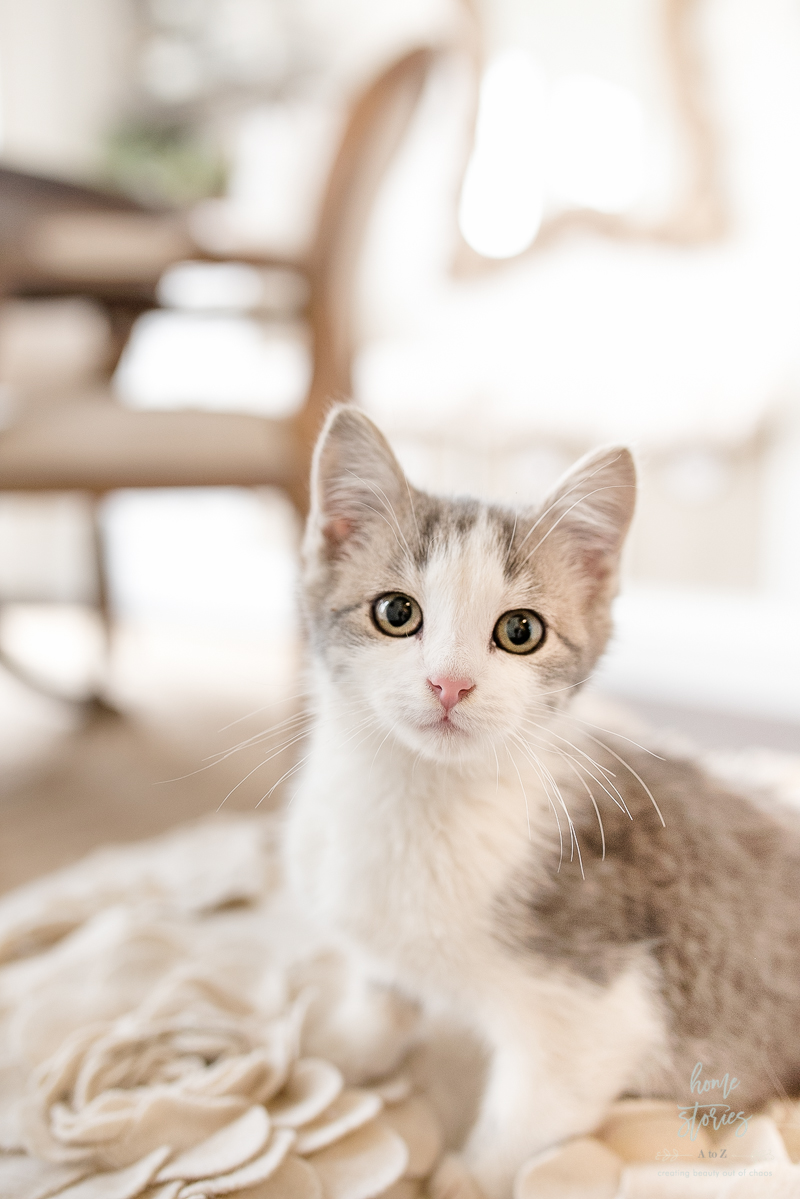 The story doesn’t stop here. The next day when I was taking these cute pictures, I noticed that the kitten’s back legs were not working properly. We had already scheduled a vet appointment for later that afternoon just to make sure he was okay after his unconventional car ride, but now I was really concerned. I requested X-rays be done of his legs and knew it wasn’t good news when the vet called me back to view the films. She explained that the kitten had a badly broken femur and the recommended surgery would cost between $2000-$2500. I promptly burst into tears. 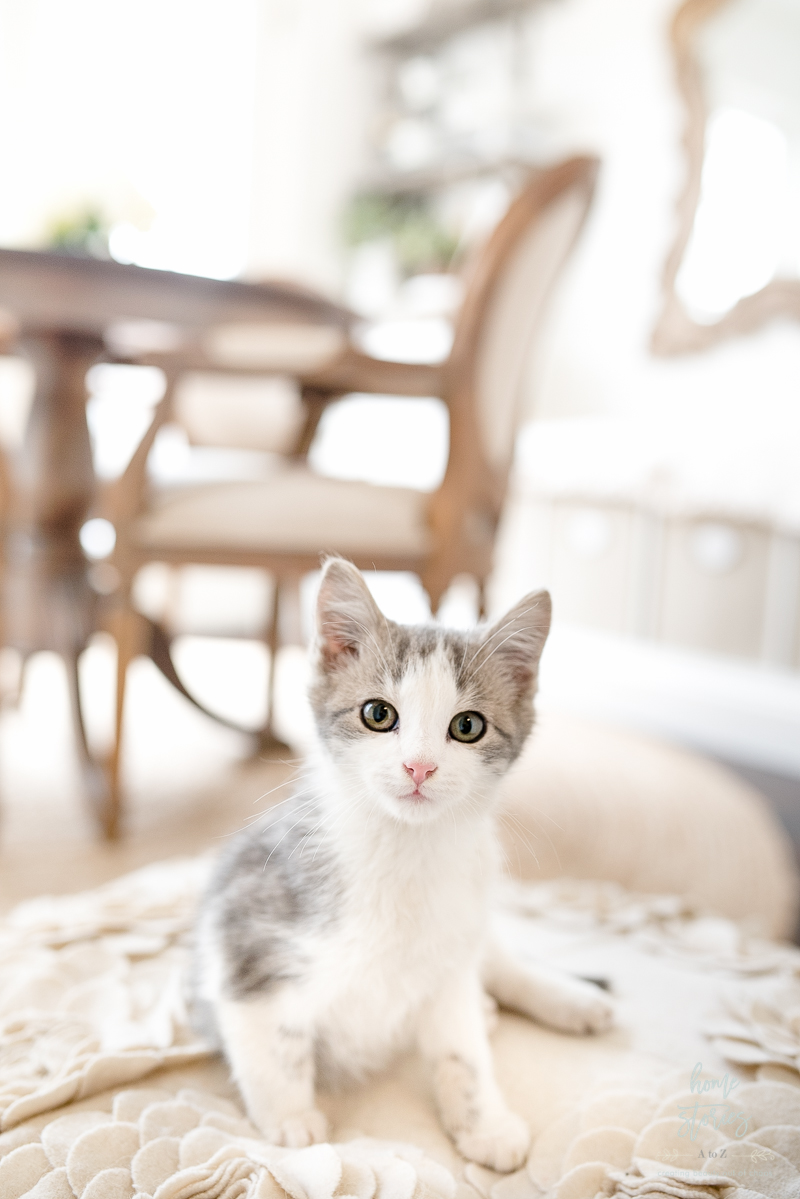 We had known this kitten for just 24 hours, and I knew my severe allergy to cats made it next to impossible for us to actually keep him as an indoor cat. I had just shelled out over $300 in vet bills to find out what this kitten medically needed–and now we were financially unable to give him the care he required. I asked the vet if there was another option and she suggested amputation. That sounded horrible so I pressed if there was anything else that might be done and she suggested that restricting the kitten’s activity for 4-6 weeks may heal his fracture, but she just could not guarantee it.

I told my story on Instagram and many kind-hearted people offered to donate towards the kitten’s care if I chose to crowd-source the funds for surgery. I am a HUGE believer in the power of Go-Fund Me accounts! I’ve actually had first-hand experience receiving help from a Go-Fund Me for our son Zephan. 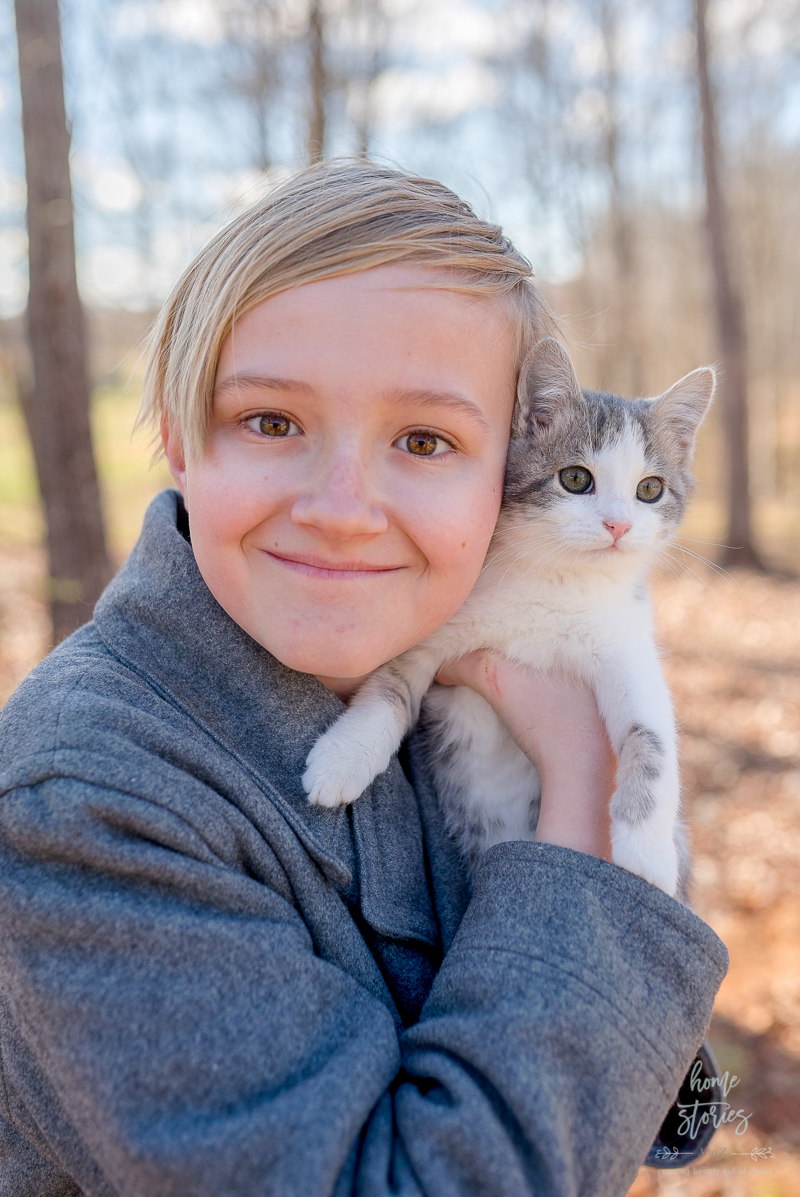 Zeph is my eleven year old and has severe osteoporosis with no known cause. A few years ago Zephan was playing in the backyard at a friend’s house, tripped over a soccer ball on soft grass, and severely broke his femur into two pieces. Nothing was normal about his break and the bone did not heal back correctly. Zeph then proceeded to break both wrists within the same year. He was our little Humpty Dumpty and no matter which experts we took him to see, and no matter which expensive genetic tests we paid for, no one had any answers for us. No one knew (and we still do not know) why Zephan has severe osteoporosis. We paid over $16,000 in out-of-pocket diagnostic (not treatment, not hospitalizations) medical expenses and our insurance denied many claims for proposed treatments. It took Zephan 9 months before he was able to walk again unaided after breaking his leg. For awhile there, we really weren’t sure if Zephan would ever be able to walk again without some sort of assisted device, such as a walker or cane. 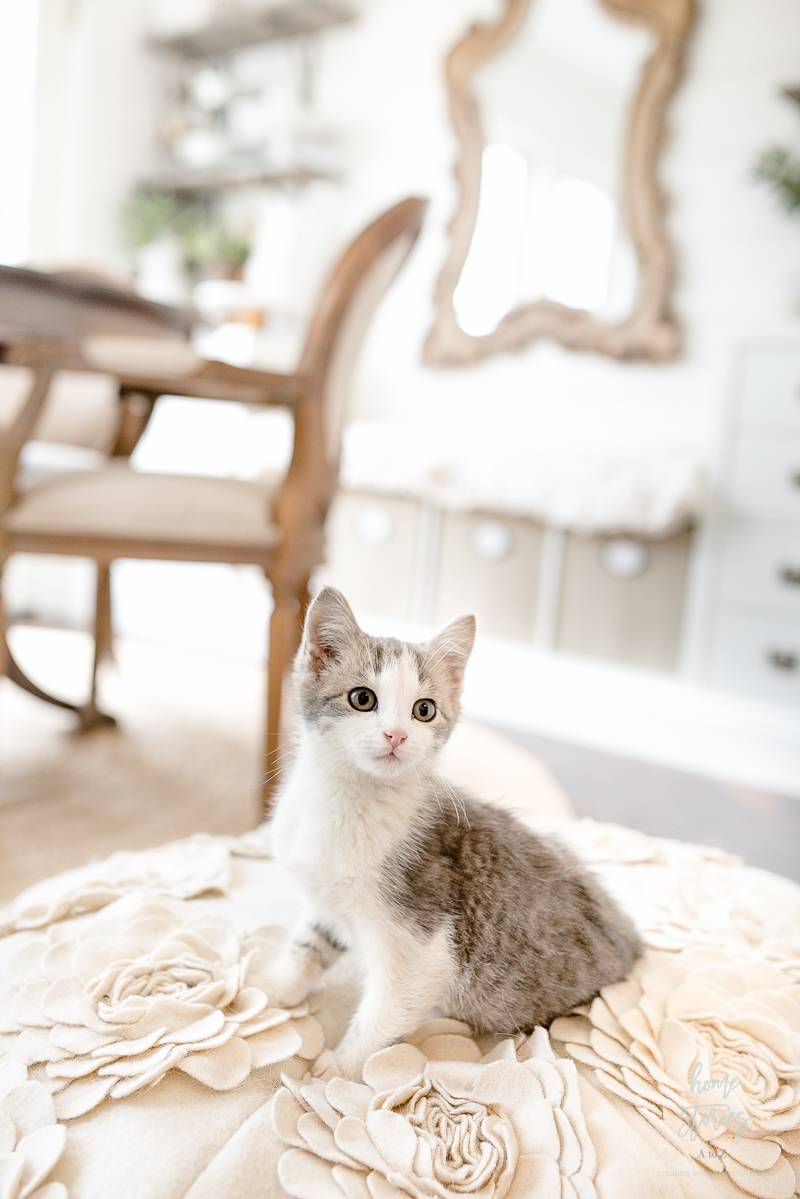 The Go Fund Me set up for Zephan was a HUGE blessing to our family, even though it was never fully funded. Every little bit helped ease our burden during those years of extreme stress. When readers suggested I set up a Go-Fund Me for the kitten, I did consider it. But what if the account also wasn’t fully funded and our family still had to pay high surgery costs for a kitten we just met and most likely couldn’t keep? We just could not afford that risk, or that expense, and so I reached out to my private community seeking advice. I also received harsh criticism from people online for not risking going with surgery. 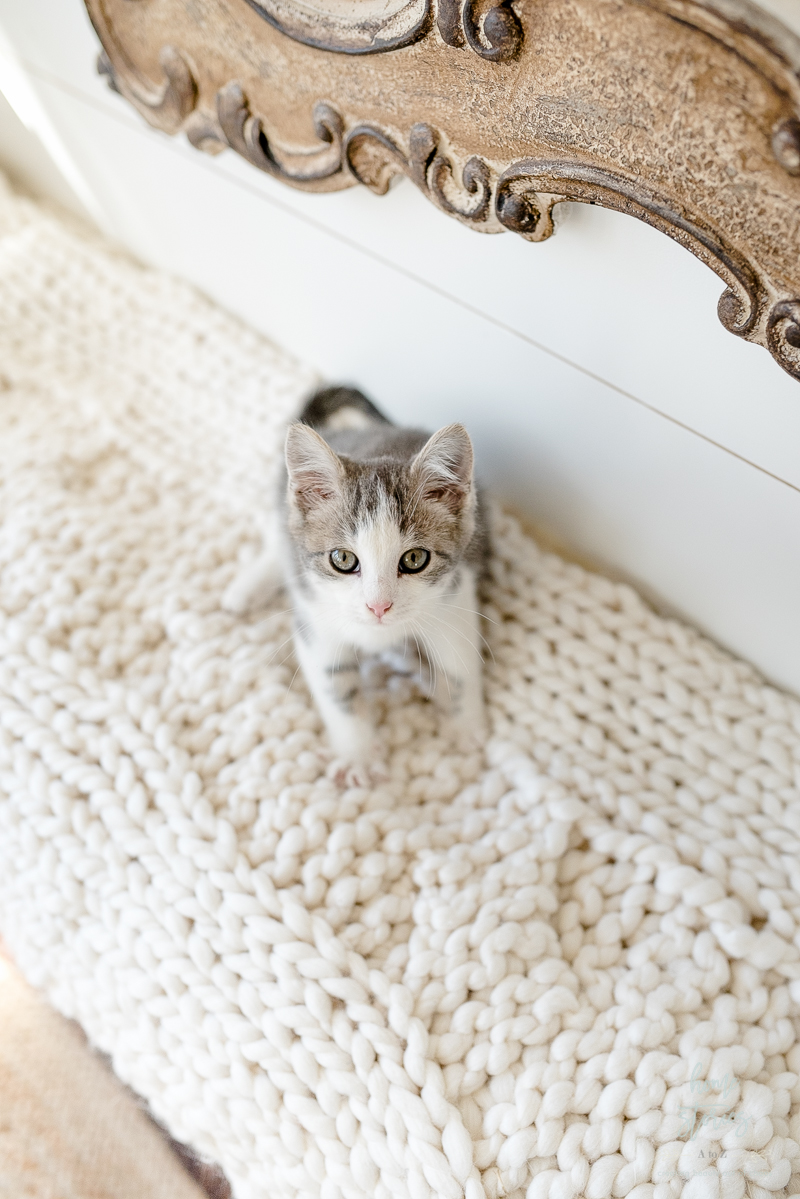 When I reached out to my private Facebook community, I was flooded with testimonials from friends I knew and trusted who had first-hand experience with feline fractures that healed on their own with rest, crating, and time. My heart was hopeful that maybe our little Sprockets would be able to heal on his own if we were able to keep his movements restricted. More importantly, I have a little boy with very bent legs who feels very insecure about his appearance and still has difficulty walking, cannot run, and cannot play sports. Would it really be a horrible thing if said little boy’s cat also ended up with some walking challenges to overcome? I already felt like this kitten was a furry little gift from the Lord. But when I saw those X-ray films and saw that the kitten had a femur break on the exact same leg as my boy in nearly the exact same place, I felt in my heart that maybe this kitten had a larger purpose to play in our lives. 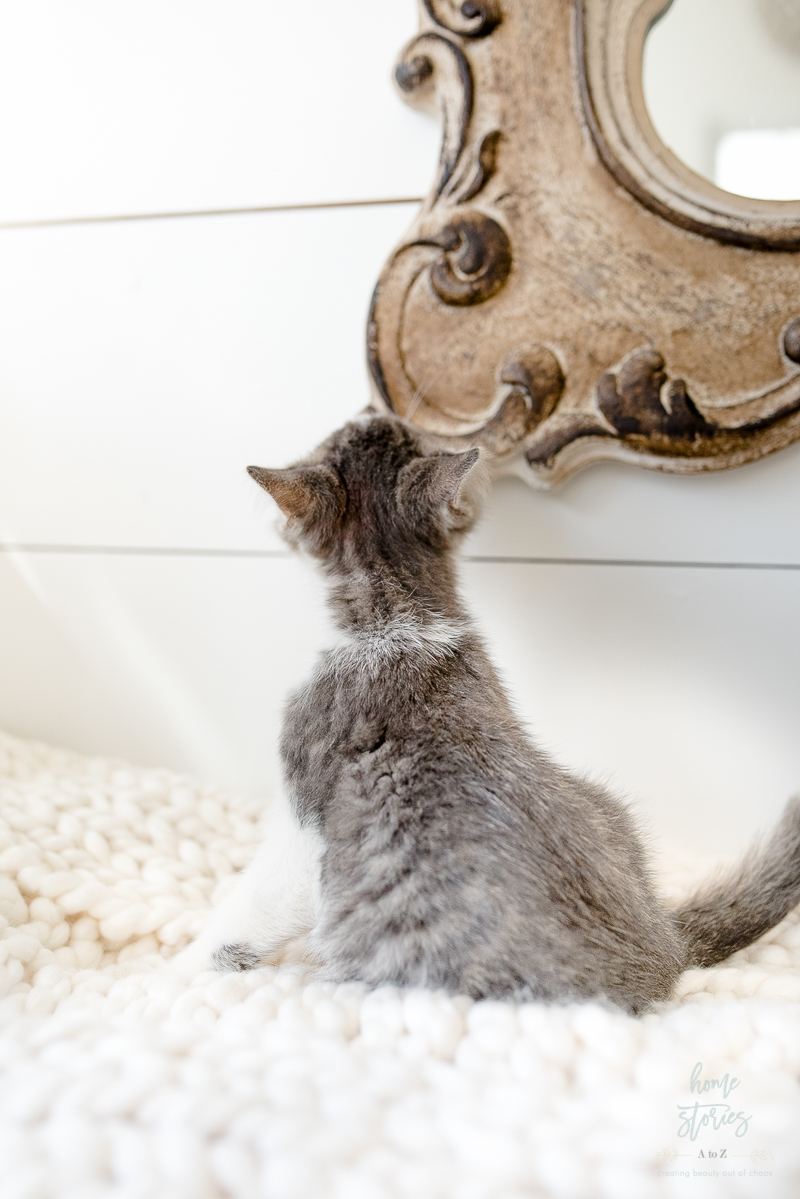 It’s been exactly four weeks since that vet appointment and today you would never know that Sprockets’ leg was broken! He still favors his left leg, but he can walk, run, jump, climb, and pounce with the best of them! Zephan frequently compares himself to Sprockets, and I think watching this little kitten overcome and thrive after so much adversity has been an amazing testimony to him. 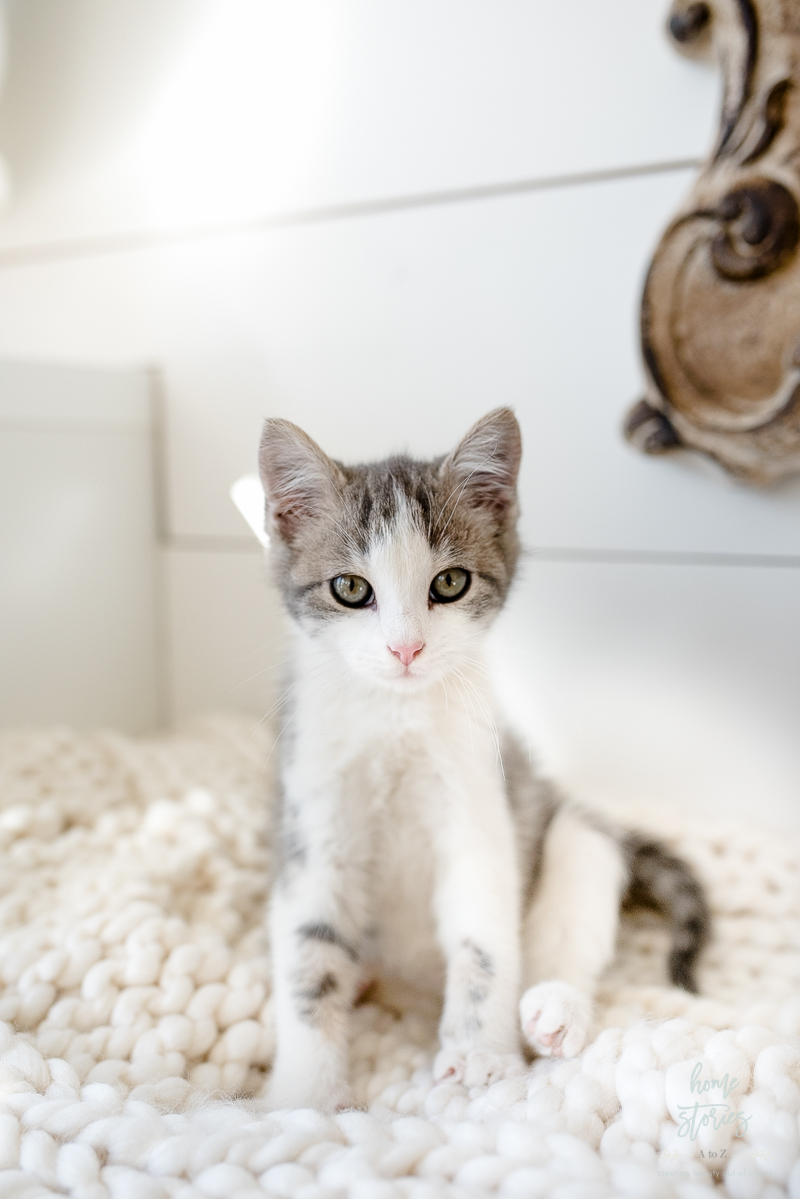 We are planning to keep Sprockets confined to his playpen (and our laps!) for another two weeks to give him the full 6 weeks to recover. Keeping him from bouncing around like a little pogo stick is becoming increasingly more difficult, but I don’t want him jumping off the couch or overusing his leg quite yet. Sprocks is doing great though and you can watch him in action on mobile on my Instagram Stories highlight reel. 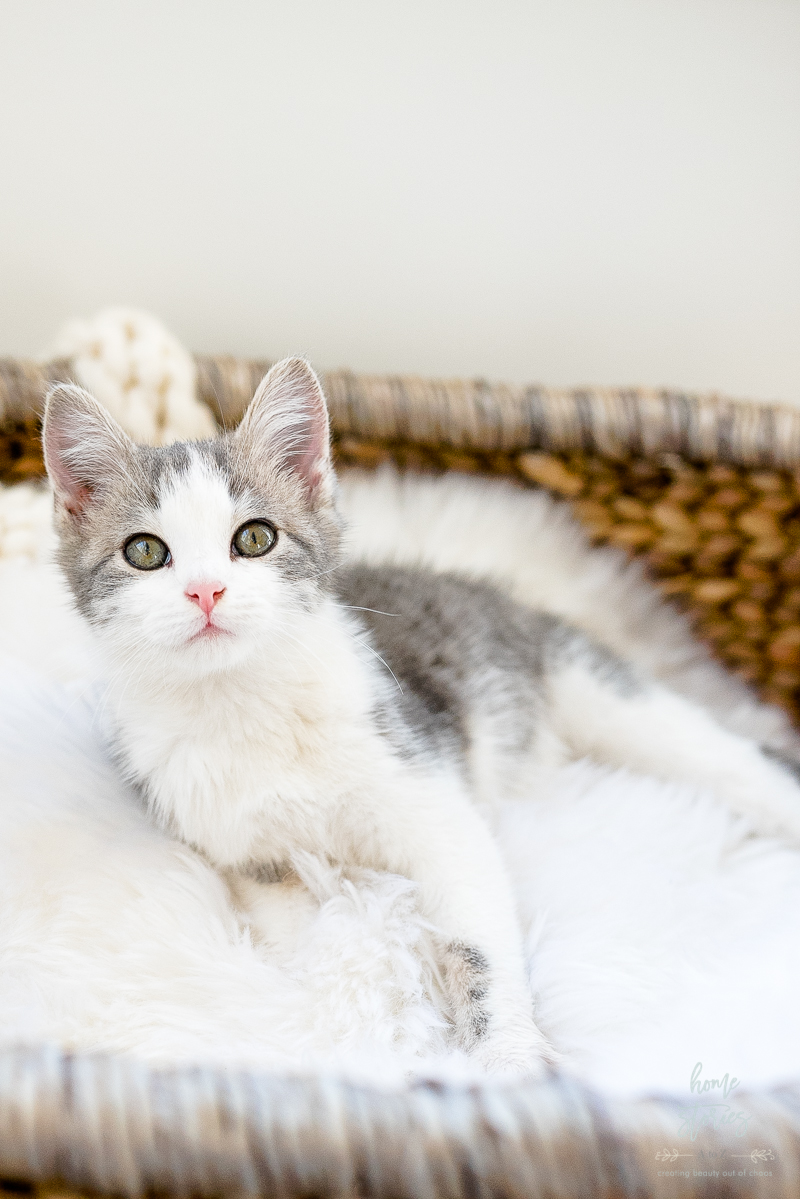 For those wondering, the name Sprockets comes from the cat in the book Mission to Universe by Gordon R. Dickson, “Sprockets is a stowaway feral kitten who becomes spaceship mascot. The crew members superstitiously believe that his finally learning to purr will portend success in their search for an inhabitable planet.” We thought it was just too perfect a fit! During the first few days we had Sprockets, getting him to purr was our personal mission! We succeeded on Day 3 and he hasn’t stopped since. I have little experience with cats, but Sprockets purrs each time he sees me and each time a family member greets him. He even purrs when the dogs come up to him to say hello! 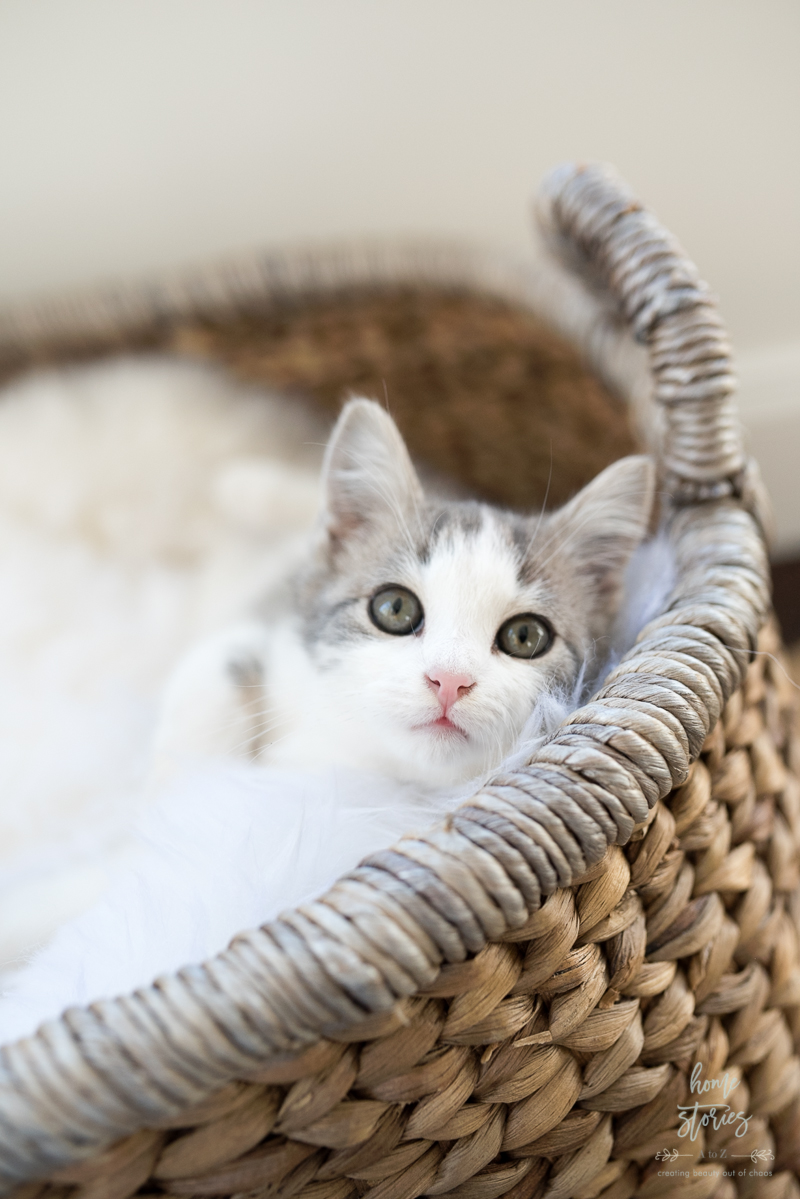 And did I mention that I am NOT a cat person?! I’m just not. I’ve always been allergic to cats and even had a bout of Cat Scratch Fever as a child that made me severely ill. If you had told me a few months ago that I would have a kitten in my house and would absolutely adore it, I would have told you you’re crazy! As it stands now, I am not allergic to Sprockets. I am warned that my allergies could change in time as he develops into a cat and has more dander. We will cross that bridge when and if we come to it! For now, we are loving our spunky little kitty and we are so grateful that he chose our engine to hitch a ride in! 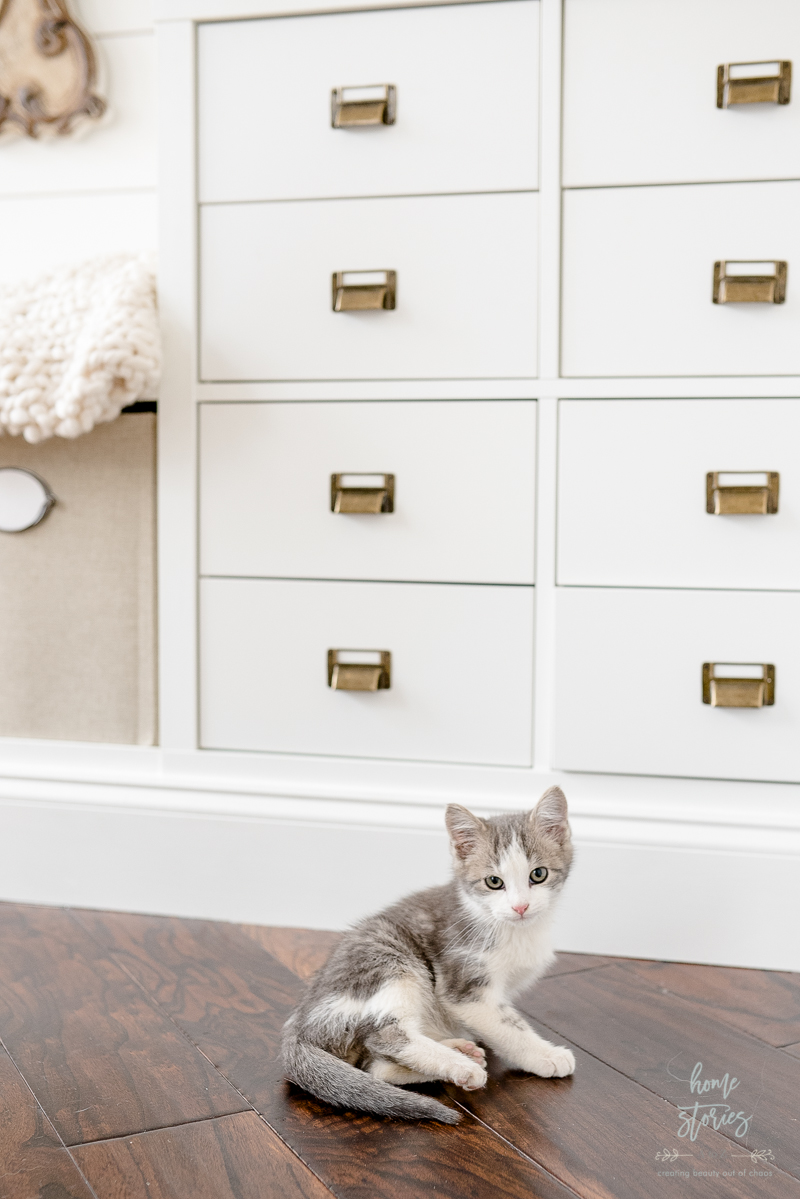 You can see more of Sprockets on video in my Instagram Stories Highlights on your mobile devices!