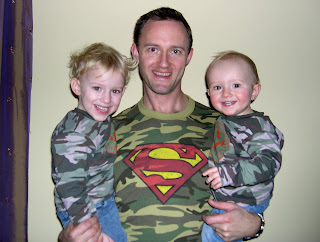 I love my husband. He is not without his flaws, of course, but he is indeed a super man. To his boys he truly is a superhero, or rather Superdaddy. But something you may not know about Matt is that he is excellent at the game Truth & Lies. This is the party game where each player writes down two truths and a lie about themselves and everyone has to pick which item is the lie. Matt has had so many bizarre life experiences that it’s very difficult to pick out the lie. I thought it might be fun to roast him a little by highlighting a few for you. (Now if you’re at a party with him, you’ll also be able to kick his butt at his best game!)

*Matt grew up on a farm and at the age of 9 was kicked in the face by a horse. His jaw was severely broken, but fortunately he survived the kick with no long-term effects. He flaps his jaws as fine now as he did back then!

*Matt & his dad found a deer on the side of the road that had just been hit by a car. So naturally, they did what any of us would do. They loaded up the dead deer as a little afternoon snack. Yes, they actually decided to eat road kill. (This explains a lot.)

*In college, Matt & his buddies nearly died of exposure on a spring break trip to the Smokey Mountains. They didn’t dress appropriately for the subzero temps and snow. They didn’t bring enough food. (I think all Matt brought for a several day trip was peanut butter and granola–mixed together in one peanut butter jar.) They didn’t have much drinking water because it froze in their bottles. But by the grace of God, they did managed to survive.

*In order to save on gas, Matt decided to turn off the car while cruising down hill and he cruised right off the road into a ditch.

*In the same vein, Matt wasn’t paying attention on the Hampton Roads Bridge Tunnel and ran smack into the back of a tow truck (yes, you read that right) and totalled our first car weeks before our wedding. The tow truck wouldn’t give him a tow! He had to call and wait for another to arrive.

*Matt forgot to put the parking brake on the car (or perhaps just forgot to put it into park) while parked on a steep hill. When Matt came out from the restaurant the car was nowhere to be found. When he looked towards the bottom of the hill, he saw his car “parked” in someone’s front lawn.

*Matt was actually hit by a car while crossing a busy street on foot in Virginia Beach. Although he was injured and should have gone to the hospital, Matt kept walking down to the beach to play some volleyball! Fortunately, his off-center nose, bloody leg, and crooked walk encouraged him to alter his plans.

*While driving down a major highway with a van full of kids from his youth ministry, Matt’s church van burst into flames. Matt had to negotiate getting all the kids out safely.

*One night as I was watching the 5 o’clock news, I saw my husband being interviewed by a local reporter! Matt was leading a youth-group-car-wash outside of an urban McDonald’s when someone began shooting. Again, my superman had to lead the kids to safety.

*A few weeks ago, an escaped rottweiler charged at our dog while Matt and the boys were at a playground. My hero tussled with the rottweiler beating him and choking him into submission. Matt kept punching him and twisting the dog’s collar until the dog’s eyes began to pop.

Oh my goodness, I really could go on and on here but I don’t want my husband to get mad…or worse…retaliate :). I love you honey. You super man you!

« A Shot of Love…A Dose of Reality
Amen Chocolate! »